Speciation is a central subject in our lab. We are interested in the phylogenetic reconstruction of closely related species and in the development of methods to understand plant speciation. We are also interested in methods that allow the reconstruction of species trees form possibly incongruent gene trees and in processes that produce incongruent gene trees. In this context, the statistical identification of hybridisation events is a topic of great interest to us. 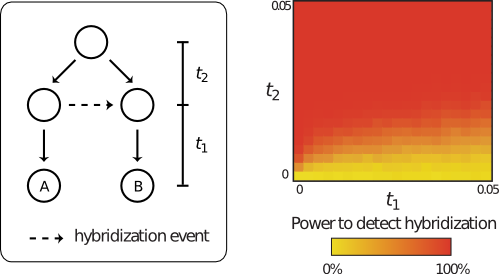 Hybridisation, or the mating of two species, is a widespread phenomenon in flowering plants. Yet, it is often difficult to evaluate its importance in a given group because the genetic patterns caused by hybridisation are similar to those of other conflicting processes. I recently developped an approach (Joly et al. 2009) that allows the statistical detection of hybridisation events, as opposed to incomplete lineage sorting phenomenon cause by genetic drift. The program JML (Joly, 2012), implements this approach.

The reconstruction of the evolutionary history of species is a major theme of the lab, especially for closely related species. Important progresses have been achieved recently to develop highly sophisticated probabilistic methods to reconstruct species trees from possibly incongruent gene trees. We are using such methods to reconstruct species evolution, but we are also developping new tools that help to understand the evolution of species (Joly and Bruneau, 2006, 2009; Joly et al., 2007; Joly et al., 2014).